AC56 Connection using a plug in

I’ve been trying out a plug in connection versus soldering the AC56 on my wing and quad so I can move it around. So far this is a real solid connection and I have not had any problems with disconnects. 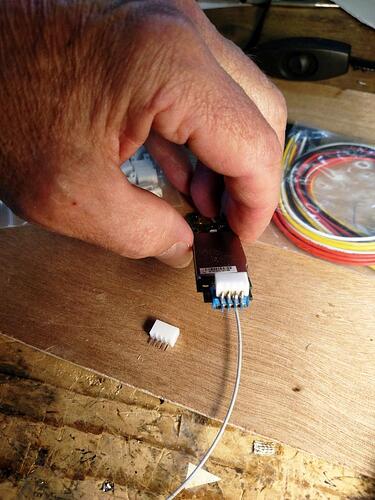 I did swap out the 26 gauge for 20 gauge wire on the power wires.

I have a question you might be able to answer for me. I asked it in another post but seeing that you’re using the AC56 and powering it from the USB, does the blue led light up on yours when powered up? And is yours wired up with b+ second from the left then D- 4th from the left followed by D+ 6st and then b- 8th from the left. Besides the one I’m going to use for the ground unit, I only have one extra AC56 as a spare and at the cost of them I really don’t want to waste it. Any help you may provide me would be Very much Appreciated. Thanks, Robert

Hey Robert, I was the one answering the other post…small world. To answer you questions, yes the blue led light does/should light up. The only time it doesn’t light up for me is when there is a low power problem, i.e., either wrong wire gauge, not enough supply from the BEC, too long a wire, etc. Well, there was the time I bought a used one that wasn’t guaranteed to work, and sure enough it didn’t, but it turned out to be a very good practice card for various things like, removing the big SMA plug, adding other antenna connections, etc. And yes, b+ is second from left and b- 8th from left. As far as D- and D+, I couldn’t tell you for certain, since when they don’t work one way, I just swap. My Pi is wrapped at the moment so I can’t tell which wire goes where.
I’m adding this last thought as an edit, and maybe somebody else came chime in if they know, but I really can’t remember if having the D- and D+ swapped causes the led not to light up.

I’m sorry, I was so fixated in the reply I didn’t look at who it was that replied to me, sorry about that. Anyways as much as I’m going to hate it I’m going use my spare. Reason I was wondering if the led lights up is that when I had it powered up to my bec I checked for power on the AC56 and it had 5.2 volts at it. IDK… Anyways, Thank You for All the information, very much Appreciated. Robert