Raspberry pi 4 will not boot

Hello, I am new to this and want to set up OpenHD. Before doing things with all at once, I wanted to test things one at a time. Following the wiki, I downloaded and flashed the 2.0.8 buster image using etcher. It flashed successfully. I have 2 pis setup, one with camera, one without. When I put the fresh SD card, is the pi supposed to boot up to a desktop or command line? All I get is a blank screen. Once I remove the OpenHD SD card the pi shows a video signal. I tried with multiple SD card and redownloaded the image file and same thing.

I’m not sure if I missed something. Any help would be appreciated, thanks!

What you should see is:

AirPi (with camera) boots into a command line and shows some stats about the video it’s sending.

Sure you have downloaded the .img file and not the source Code ?

Thanks for the reply! 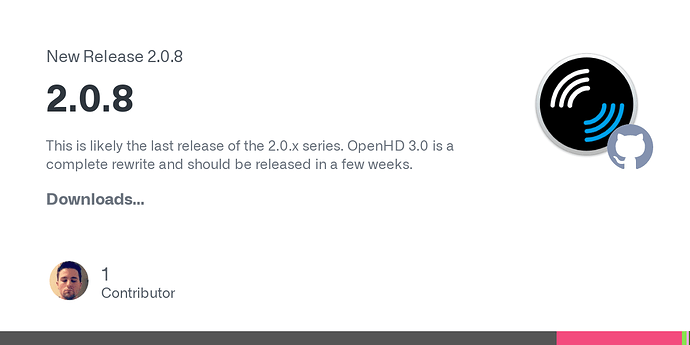 This is likely the last release of the 2.0.x series. OpenHD 3.0 is a complete rewrite and should be released in a few weeks. Downloads Stretch Download Here Still provided for people using the ol...

I downloaded the buster version as I am using raspberry pi 4. At least I know now they are both supposed to boot up with some kind of video signal. I don’t have an extra wifi dongle attached. I was planning on testing with the internal wifi first or wired if possible. Would that be a problem?

The pis work fine with a raspbian image. It’s just the openHD sd card that has ever caused that behavior for me. Should I try an older version of OpenHD? if so, any version you recommend?

I really appreciate the help!

Here is a link to 2.0.10. Use at own risk. Ot has been reported that the groundpi sometimes crashes.

The crash seems to be related to the adsb sdr feature.

I flashed the 2.0.10 version and same thing happens. I’m not sure what could be going wrong. Could it be etcher messing up the flash?

try Open.HD-2.0.8-buster.img. It works for me on PI4. Not tried newer one.
Also, try other hdmi port. The one closer to usb-c works for me.

The 2.08 is the one I tried originally, multiple times, multiple downloads, multiple SD cards, and multiple raspberry pis. Neither of the HDMI ports make a difference. The only common denominator seems to be the computer I flashed with and etcher. Regular raspbian images work fine though. I will try to flash with a mac through dd and see if there is a difference. I will reply with the results.

I used dd to prepare card.

I just flashed with a mac twice and same result using DD. Once with the r before the device name and once without. I’m really at a loss here. I’m not sure what the problem could be. Does SD card size matter? I forget if I tried a 8GB one. I’ve been trying a 64GB one and I think I tried a 32GB one.

Update: I just used a new 8GB card and same result. My only thought is maybe the SD card is expecting a device that is not there and it doesn’t boot? or somehow the Images I download become corrupted? I downloaded multiple times on my windows machine 2.08 and 2.0.10 and on my mac, so that is hard to believe.

Your problem is the monitor resolution. In the config.txt file, uncomment