For those who use a separate channel /switch for arming (eg Ardupilot, Inav…) I did a nice logical switch combination inspired from internet, using a combination of two physical switches (one 2position, one momentarily).
It’s designed mainly against accidentally disarm, preventing mid-air disarm and almost certain crash.
In my case, chanell 5 is used (aux1 in Expresslrs - somehow mandatory in their tutorial) and for “source” it’s set to logical switche L12.
I’m using logical switches L8 to L14 because the first 7 switches are occupied for flight-modes in Arduplane.
See the pictures of my radio screen below. 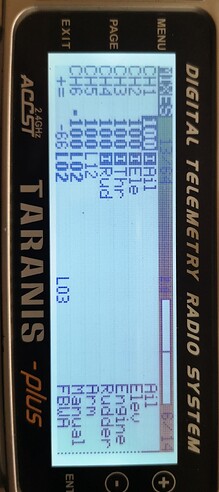